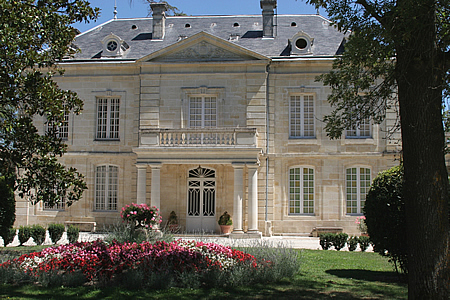 We acquired chateau Coulon Laurensac in 2001. I still remember the first time we laid eyes on this beautiful estate. Hidden behind a blue wrought-iron gate we could see the entrance door of the most beautiful house we had ever seen.
I had to ask Ronald to pinch my arm. Was it really possible that this beautiful home was for sale and that we were the first in line to become the new owners? But it was meant to be and we fell in love on the spot.
Xmas 2001 I was packing boxes and in the first week of January 2002 we could call Chateau Coulon Laurensac our home.

300 years of history between these walls

The history of the name of the Chateau can be traced back to the 14th century. Clergymen of the St Eulalie parish owned land in Maydieu and d’Orensac. In 1715 Joseph Bertrand de Roberic, the great chancellor and Provost of Guyenne acquired the land called Coulon Laurensac and constructed a house in 1724. According to the tradition the house was called a bourdieu. By deed a bourdieu is a farm estate comprised of a noble house, housing for the winemaker and staff, an above ground cellar called a chai and a cuvier. Other buildings, vineyards and gardens could also be part of the estate.

Well-off citizens built country estates to cultivate hay to feed their horses and cattle, to create vegetable gardens and to cultivate vineyards of course.

Joseph Roberic had some money to spend. He was the Provost General of the Generalité of Bordeaux, the local head of the military police. His job was to collect taxes and keep law and order for King Louis XV. I’m afraid Roberic did a little more then just that and he plotted several lucrative schemes on the side. One was based on declaring to the king a large number of non-existing chevaliers based in Blaye. Their salary disappeared in Roberic’s pockets. This left the yearly problem of the review by the commissioner of the military police to be resolved. The Provost Roberic therefore sent real cavaliers from Coutras and Ste Foy to Blaye to impersonate their imaginary colleagues for the morning inspection. He cleverly planned the inspection in Coutras late in the afternoon. I suspect he made sure that there was plenty of wine served over lunch to lower the risk that the commissioner would recognize his men on the second inspection.

Many years Roberic was permitted ‘to live well’ of his activities but in 1735 he was sentenced to nine years in the galleys. I could not dig up if he ever served this sentence.

In 1764 Chateau Coulon was sold by his daughter Margaret (!) and her siblings to Francois Felix Batanchon, an ancient naval captain turned negociant. He renovated the house, the farm buildings and the vineyards. Two more families enjoyed the beautiful surroundings of Chateau Coulon Laurensac until in 1842 Eugene Beyssac , another wine merchant, acquired the chateau. He owned several other properties along the riverbank. These were all sold again after several years, except Chateau Coulon Laurensac. Eugene offered it to his daughter Marie Anne as a wedding gift in 1868. 5 generations of Beyssac continue to live in Chateau Coulon Laurensac before it is sold again in 1960. Over more then a 100 years only some plots of the surrounding grounds had been sold to pay the steep inheritance taxes. The vineyards we’re uprooted after world war I when the property’s size was reduced to its current 12 acres (5Ha).

Wonderful meals and wine in abundance

The kitchen was the heart of the home in the early days. The large fireplace posed in the north wall provided warm meals and heating. Today we use this room as our dining room and on our tours you can join us here for an unforgettable farewell dinner. If it is chilly we will light the same fireplace in front of which Roberic ate with his family.
There are several letters of guests that stayed in the country estates on the Garonne riverbank speaking of their experiences. One guest wrote to his family in the north of France:” It is so pleasant to spend time at this chateau on the waterfront. Only a few miles away from Bordeaux we enjoy the fresh air, wonderful meals and wines in abundance. “ It seems like nothing has changed over 300 years.